Home
Ceiling Maintenance
Can You Use Drywall Anchors in a Ceiling?
Prev Article Next Article

Drywall anchors are certainly useful when it comes to hanging things from a wall. However, you might have an awesome idea to hang something from your ceiling but you’re worried that the drywall anchors won’t work, right?

The last thing you want is for a hanging object to fall and leave a gaping hole in your ceiling, or worse, injure someone. In this article, I will expand a bit more on what types of drywall anchors are suitable for what you’re looking to achieve.

Seeing that we’re talking about drywall anchors, I decided for this article we’ll only focus on hanging things from a drywall ceiling (and not concrete, wooden, etc).

But before we get to the “what are you hanging?” part, I would like to talk about the two ways you can go about hanging objects from a ceiling:

Hanging from the Ceiling Joist

This method won’t require the need for any drywall anchors.

Most construction experts and seasoned handymen will advise you hang the object from a ceiling joist or beam. I agree with this approach, especially with heavier objects, as it ensures maximum support.

But sometimes you’ll have to hang something directly from the drywall ceiling, and that’s where drywall anchors come in. I’ll talk more about that in a bit.

In case you’re wondering… How do you find a joist if you can’t see what’s happening above the ceiling?

Don’t worry. There are tools to help with this.

You can use a stud finder like this one (link to Amazon). These are great for finding wall studs and ceiling joists. Simply place it flush against the drywall and start moving it around until the light flashes to indicate a joist exists behind that spot.

I found an interesting tip in an online forum – Instead of using a stud finder, you can also use a small rare earth magnet. The beauty of this (aside from being the cheaper option), is that it will stick to a stud screw that attaches the drywall to the joist.

Stud screws are almost always in the center of a joist, so you can have peace of mind that you’re drilling in the middle of a joist. Just remember to drill an inch or two away from where the magnet sticks to avoid drilling onto the stud screw.

Once you find the joist, you will need to drill a pilot hole through the drywall ceiling and into the joist. A “pilot hole” is a hole in which the screw will go in.

These pilot holes should be smaller than the screw going into the hole. So, make sure you use a drill bit that’s slightly smaller in diameter than that of the screw. If the hole is bigger than the screw (or even the same size), then the screw will slide right out.

For a more detailed guide on how to hang objects from ceiling joists, check out this article.

Hanging Directly from the Drywall

I think this approach is the scariest for most people. I don’t blame them for having concerns.

Drywall is basically two sheets of paper with some “stuff” between them, so how could they possibly hold something with a little weight to it?

I would always suggest you go with the first approach – hanging from a joist. However, sometimes that may not be possible, and you’ll be forced to hang something directly from the drywall itself.

Fortunately, there are some amazing drywall anchors you can use for this method. We’ll cover some of them in the section below.

Best Drywall Anchors to Use in a Ceiling

What you intend to hang from your ceiling will play a huge role in determining what type of anchor to use. You will use a different anchor to hang a 5oz (140g) wind chime than you would use to hang a 10lb (4.5kg) plant.

I mentioned before that certain scenarios will force you to hang something directly from the drywall ceiling. Or, it could even be that you’ve found the optimal spot to hang your desired object, and it just so happens there isn’t any joist available at that specific point.

Don’t worry, we can use drywall anchors to hang objects directly from the drywall ceiling. There are a few types of anchors out there, and they each have their own purpose.

Manufacturers include the maximum weight an anchor can hold. Keep in mind these weights are meant for walls and not ceilings. As a basic guideline, we use a third of the manufacturer’s maximum weight as the limit for a drywall ceiling.

I spent a lot of time doing the research, so let’s see what works best…

Hanging something light like wind chimes, baby carousels, or tiny plants, is pretty easy and straightforward to do.

For objects like these, you can use the cheaper drywall anchors. These anchors can be bought in bulk for relatively cheap. The plastic kind is the cheapest, but I would spend a tiny bit more to get the steel type. That said, I personally wouldn’t use these (plastic or steel) for anything heavier than 10lb (4.5kg).

It’s important that you stick to the manufacturer’s instructions when using these anchors. Don’t use a similar size screw to what they recommend, use the EXACT same size!

To get an idea of the costs, here’s a set of the steel type anchors on Amazon.

For me, anything above 10lb will fall under this category.

Toggle bolt anchors are the go-to anchors for the heavier objects. They are sturdy in build and designed to spread the load more evenly.

These anchors come in a variety of designs, but they have similar mechanisms. Let me quickly explain how they work…

The most common type of toggle bolt anchors has a spring-like mechanism. Picture a long screw with two perpendicular “wings” at the end – just like this one (link to Amazon). These “wings” can be pressed down so that they are parallel to the screw.

You will drill a hole in the drywall that’s just big enough for the wings to pass through while pressed down (parallel to the screw). As soon as the wings pass through the hole, they will snap back in place. You then fasten the screw all the way up to clamp the drywall and you’re all set!

This is the strongest (and my favorite) toggle bolt anchor that I know of. They’re also the most expensive at roughly $1 each, but ultimately, you get what you pay for.

I found a cool video showing how toggle bolts work “behind the scenes”. I set the video to start at a specific time when he selects the toggle bolt for demonstration. However, if you want to you can rewind the video to watch from the beginning as well.

You can hang large objects such as hammocks, ladders, and bike racks from your ceiling too. These will always be attached to the ceiling joists, though. No question.

You’ll also need extra hardware and equipment to do a good job. Most times, all the hooks and fasteners you need are included in the package.

I’m not going to dive into this right now, but here’s an excellent article explaining how to hang hammocks.

And, if you can, use the ceiling joists and there won’t be a need for anchors at all. 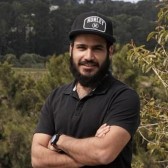 More from this Author

As a kid, I spent many hours lying on my bed and daydreaming while staring at the ceiling. If that doesn't convince you that I'm qualified to pass on some ceiling advice, then I don't know what will. Oh, and I also have a Diploma in Architecture.